(The following article was written in 2011 by Marilyn Logelin Maloney commemorating the ten year anniversary of the founding of the St. Bonifacius Minnesota Historical Society.)

OUR HISTORICAL SOCIETY IS TEN YEARS OLD!! Here’s how we got it started.
By Marilyn Logelin Maloney

About ten years ago, after attending a Memorial Day service in St. Bonifacius, a few of us genealogists who had grown up in Boni got to talking about the need of a Historical Society in our home town. In the past, when an interested person who was searching his/her ancestors came to town and asked the locals where he/she might find some family information, they would send them down to the St. Boni Farm Store where the owner, Tom Logelin, was tending his business. He had a strong interest in the town’s history, so became the unofficial historian with most of the stories only in his head.

After reading the book written by Ken Heitz on his family roots, I called him to see what he thought of the idea of starting a Historical Society and he remarked, “What are we waiting for?” 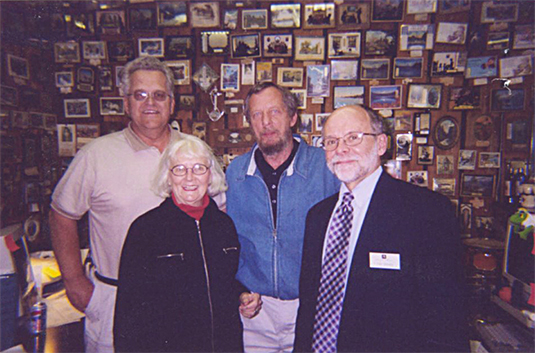 Founding members from left to right: Tom Logelin, Marilyn Maloney, Ken Heitz,
and Mr. Glines (outreach specialist of the Minnesota Historical Society)
I set up a meeting with Mr. Glines, the outreach man, Ken Heitz and Tom Logelin, but Tom was too busy to meet with us during the day. He agreed that if we met at his Farm Store, he could talk to us in his office during his lunch time. (Yes, he actually munched on his lunch during the meeting.) I had never met Ken and all I knew was that he was one of the Heitz boys who had a baseball diamond next to their home near the railroad track where he and his brothers seemed to be playing ball each time we drove by. I did know he was a retired history teacher. He has become our official researcher and historian.

Mr. Glines cautioned us about things to avoid. He said many clubs get too ambitious and pull the “cart before the horse”. So we proceeded slowly. We were careful with our collection policy since we had no space. We decided to only collect items that fit into a file cabinet such as photos, documents, old letters, etc. We met in the basement of the library, a very historical building dating back before the Depression days when the bank folded.

I applied for a 501(c) 3 status. By the time it was approved, I felt I had made a friend with the lady in Washington D.C. who helped me walk through the many forms so often. On July 20, 2001 the letter came and we were recognized for the IRS exemption. We needed to list three executives to make our new organization official. That was easy. We only had three members! Marilyn was president, Tom was secretary, and Ken was treasurer. I got a P.O. Box number and donated the $15.00 balance required for our new bank account.

To entice people to show up for our first meeting, we lined up Mr. Glines to speak and showed early slides of the town made by Patrick Mader. He had photographed old post cards he located from old timers around town, such as shots of the first business places on Main Street, etc. But our first meeting had to be canceled due to a blizzard! On the second try, both Tom Logelin and Ken Heitz were unable to make it and, due to a tap dancing accident, I had a large bandage on not one, but both arms! Twenty-two people showed up. Many were from out of town. There I was, all alone except for my husband who ran the projector.

We had good “turn outs” at following meetings. We had guest speakers. One was Edie Widmer from Germany. She told her WWII war stories on how she met her husband Sid when only 17 years old before she became a war bride.

It did not become an “old ladies” club. Seventy-five percent of our attendees are men. One of our most valuable members is Phyllis Bruhn who represents the Baptist Church, which was founded in 1858.

We took advantage of Mel Hoagland’s professionalism and talents by asking him to preside over our meetings. We wanted well run meetings and to end on the planned time of 8:30. It was hard to discourage members from reminiscing the good old days during the meetings, but we got caught up with that after we adjourned. One memory triggered someone else’s childhood story.

We had no “seed money”. Mr. Alfred Gale, who had been faithfully attending each and every meeting made a generous donation to help us get started.

Which project to tackle first took a brain storming session. There was such a huge need because nothing had ever been done to save our history. We ended with a long list, so prioritizing was hard.

We purchased our new computer from a donation made to us from the local Lion’s club. We immediately added the PAST PERFECT software which was especially designed for Historical Societies. Tom Logelin spent days, weeks, and months doing the tedious job of data entry from our paper records filed in three-ring notebooks. Mary Ann Geyen was our file keeper. How lucky could we get? Mary Ann had her Master’s Degree in library work. When she got stuck, she could always call Larry Hutchings from the Carver Co. Museum in Waconia who was very helpful. A couple of church ladies, Harriet and Rosemary Vanderlinde, who were quilters, volunteered their time on Tuesdays to help Mary Ann with the nitty-gritty. It was fun to see all the old pictures that had been brought to us. Because we had a copy machine, we got to return the precious photos to the families immediately after preserving them on the computer.

To build our membership, we located “out of towners”, mailing over three-hundred announcements with invitations to join. We got the names from the Catholic School graduation pictures (someone had added all the names on the back) from 1920’s up until the school closed. (Yes, many had passed on.) One-hundred-ten alumni responded. Barbara Hoagland Wagener located current addresses by calling local relatives. (We have had little luck with the Public School as just no records were available. Any ideas would be welcome.)

You know “the rest of the story” from reading our newsletters. We are extremely proud of our efforts and accomplishments and grateful for all of you who have supported us. There are many more people whose time and energy played a big role, whose names I didn’t mention. Our next goal is a web page. The entire world will have access to find the history of St. Bonifacius, Minnesota, USA on the internet. We have 3,800 files in our computer. Your ancestors will not be forgotten.

Click here if you would like to make a donation to support the St. Bonifacius Minnesota Historical Society. Thank You!