St. Bonifacius is a settlement in Hennepin County, Minnesota. It is bisected E-W by Minnesota State Highway 7 and N-S by County Road 92, and is located about 25 miles west of Minneapolis. It is part of the Waconia School District. The population was 2,283 in the 2010 census. It is one square mile and completely surrounded by the city of Minnetrista. 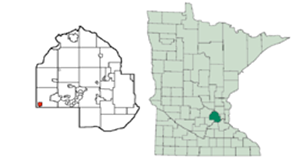 Adapted from Wikipedia, the free encyclopedia 2016.
By Kenneth Heitz
On April 10, 1858, Township 117 Range 24 was set aside by the Hennepin County commissioners as “German Home.”

Earlier in the decade, Yankees (or English-speaking) settlers came across the bays of Upper Lake Minnetonka and began staking out claims in the northern half of the township; at the same time German-speaking settlers moved into the southern half after trekking north from the river cities of Shakopee, Chaska, and Carver. Claiming and staking out tracts of land, each group was almost ignorant of the other's existence.

In the spring of 1859, residents of the township met at the Lake Minnetonka home of M.S. Cook to take steps for the organization of the township. A new name for the township was proposed and accepted:"Minnetrista". (The name in Dakota meant "crooked lake", likely referencing Whaletail Lake.)

The settlement in the township’s southwest corner continued to be called German Home. The name St. Bonifacius was probably used concurrently with German Home. The former name received de facto recognition when, in 1856, the U.S. government established a post office on Section 30 and called it St. Bonifacius.
The settlement of the St. Bonifacius area was chaotic and complex. The History of Hennepin County and the City of Minneapolis simply states, “John and Joseph M(a)erz took claims adjacent to the present site of St. Bonifacius in the fall of 1853, settling there permanently with their families in the spring of 1854”.

The Maerz brothers were Bavarian immigrants who, in the 1840s, settled in Cranberry Township, Crawford County, Ohio, before moving to Minnesota Territory. Other Crawford County families followed: that of John Hirschberger, Alois Kramer, and Joseph Bauer. It was this nucleus that organized the parish of St. Boniface in 1859 and started the first businesses in St. Bonifacius.

Also, during the mid-1850s, another group, this group from Dayton, Ohio settled in the St. Bonifacius/Minnetrista area and organized the German Congregation of Baptized Christians in Minnetrista in 1858.

These founders, originally from Teterow in Mecklenburg, were John Wendt, Carl and Rica Bruhn, Sophie Ganz, Ludwig and Maria Zarandt, Franz and Marie Strobach. Over the next fifty years, the St. Bonifacius area attracted more settlers, overwhelmingly Germans from Europe and from eastern states, especially Pennsylvania. 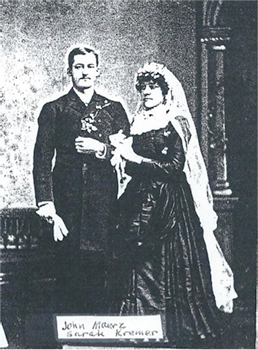 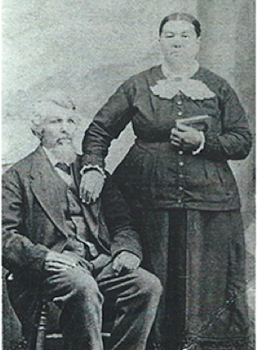 The Maerz bothers were among the first Euro-American settlers of the area now known as St. Bonifacius. LEFT PHOTO: John Maerz (1812-1909) married Sarah Kramer in 1854 in Ohio. She died in 1872. RIGHT PHOTO: Joseph Maerz (1823-1901) pictured with his wife, Barbara Hirschberger.
St. Bonifacius was incorporated in 1904. At that time, the village had a population of about 250 and had become a very active service center for a large prosperous rural population. There was a hardware store, a harness shop, a hotel, a saw and feed mill, a state of the art creamery, a bank, a general merchandise store, a blacksmith shop, and a bank.

This was the “Golden Age” for St. Bonifacius and for many other small towns across America. In 1904 the Great Northern was routed through town and further spurred development: another hotel, a furniture store and mortuary, another blacksmith shop, a barber shop and confectionary, a meat market, another bank, a livery business, a grain elevator, several saloons, a millinery, an electrical shop, several car dealerships, a lumber yard, two coal companies, and a stock yard. Most prominently, though, was the Minnetonka Canning Factory spearheaded by Matt Hegerle. Over the next twenty years, it was to become one of the largest canning factories in the Midwest.

By the end of the ‘20s, this “Golden Age” had come to an end. The lumber yard burned down, the two banks closed, the canning factory stopped production, and curbside businesses were boarded up; St. Boni’s population stagnated. 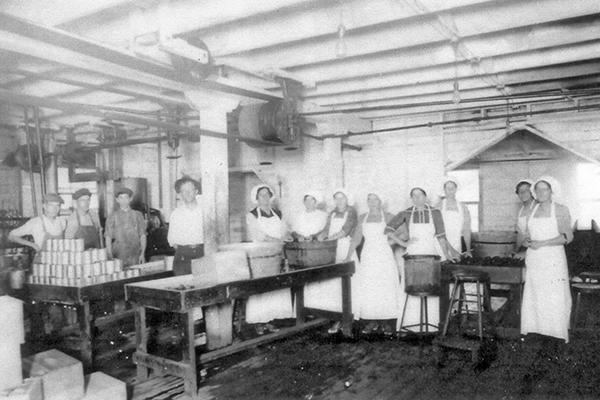 Canning Factory
HISTORICAL POPULATION OF ST. BONIFACIUS   (U.S.Decennial Census)
The high farm prices and rural prosperity of the early 1900s never came back. As farmer prosperity waned so did the prospects for many small American towns. But unlike other rural communities, St. Bonifacius survived; it survived by virtue of timing and location.

In the late 1930s, war clouds were gathering over Europe and Asia. American industries were converting from peace-time production to war-time production. Local men (and later women), unemployed and under-employed for a long time, now found steady work and steady income within driving distance, at places such the Twin City Munitions Plant and Minneapolis Moline.

St. Boni’s population stabilized and began to grow: 20% in the 1940s and 30% in the 1950s supported by industries in Mound, Spring Park, Hopkins and other western suburban communities.

The farm economy that surrounded St. Bonifacius in the past no longer exists. Today, St. Boni is a one-square-mile “bedroom community” with housing developments pressing in on two sides. St. Bonifacius, along with surrounding Minnetrista, is now fully integrated into the Minneapolis-St. Paul Metropolitan Statistical Area.

Click here if you would like to make a donation to support the St. Bonifacius Minnesota Historical Society. Thank You!